This is the first in a series of posts about writing a web application with the Play Framework in Scala. For the purpose of these posts, we will be writing an online concert ticket store named TicketOverlords. Some things will seem goofy or strange at first because not everything will be developed correctly the first time.

All of the code written during this tutorial is available as a git repository. You can follow the commit history as a separate learning path. The final commit for each post will be tagged as well. The final tag for this post is here.

The first thing we need to do is get the software for our development environment. I personally use the Scala IDE which is a version of Eclipse (I use the two names interchangeably). You can use what you want, that’s just what I use. In addition, you will need to get a copy of the Play Framework distributable that includes activator. (I’ve linked to the version I’m using, which may be outdated by the time you read this).

The activator tool comes with canned templates for the basic requirements and folder structure for a Play application. if you are not using activator but still want to follow along, the structure is documented here.

At this point you will have a very basic project you can interact with by running the activator command line.

The run command starts the local web server on port 9000. You can verify it is running a basic “Welcome to Play” page by opening up http://localhost:9000 with any web browser. The ~ character before the run command causes the project to recompile on any source code change. Otherwise, the source will recompile the next time a request is made.

Getting the IDE up and Running

Preparing your project for eclipse is very straight forward inside activator:

Now in eclipse you can Import -> Existing Projects into Workspace. Sometimes when you do this, you may encounter an error with views not compiling. This is an oddity in eclipse but not when you compile inside activator.

This is pretty common and nothing to be worried about. In the menu select Project -> Properties then choose the Java Build Path option. Under the source tab, click the Add Folder button and select the target\scala-2.11\twirl\main folder and hit ok. After a refresh the compile errors will disappear.

Since Play 2.4 was released since this post was published, the default template may not directly match the example here, so if you want a 2.3.8 version, check out the initial commit from the Project Repo

Make sure the activator console is running and load the application in your web browser. It should look similar to this: 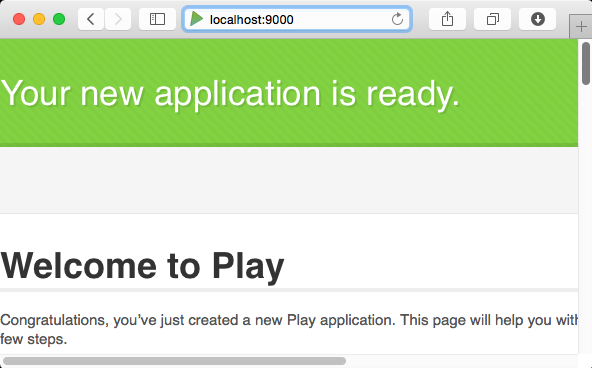 Open up app\controllers\Application.scala and you will see that it simply loads views.html.index, which is the Play template file, by passing it to Ok(). This is one of several Result classes that can be returned. The most common ones to use are Ok and BadRequest. A view template is not the only acceptable argument type for the Result input. You can pass in a String or a JsValue among other things.

Replace the contents of the index function with a result that is just a raw string.

When you reload this in your web browser, you will see the string output as the result.

The Play framework includes a templating system named Twirl. The templates reside in the app\views\ directory. If you open up index.scala.html you can see the first line are the arguments passed in to the template. On the third line there is a call to @main(). At first glance, the main template appears to accept one argument, when in fact it is two. The block after @main("Welcome to Play") is actually the second argument. If you open up main.html.scala you can see it being passed in and then rendered inside the body as @content.

Let’s modify our index.html.scala to match the following code snippet:

Since we are now only expecting an Int to be passed in to the controller, we are now required to make the following change back in the Application controller:

This looks ok for now, but there is a minor problem. The template as it stands is hard coded to display the available quantity as plural. Change the ticketsAvailable val in the index() function to be 1. And you will get the following grammatically incorrect sentence.

Never fear! With twirl templates, you can simply embed scala inside of @{} and have it render as you would expect:

You can make the logic for your templates as complex as you want. Despite this capability, you should think hard about what logic belongs in the templates and what can be handled in the controller. Maintaining logic inside of a template is not fun for anyone and it is generally harder to test.

REST Services and Client Side Apps

So now you have learned the basics of using the template system and how they can be composed of other templates. If this was 2009, that would be wonderful. But it is not 2009, and all the rage these days are SPAs or other more complex applications primarily driven by client side rendering.

To do this, we are going to need a whole bunch of REST API endpoints and a single page that runs our AJAX (or AJAJ if you want to be pedantic) and builds the DOM from there.

Creating a controller and route

Up to this point, we have only been modifying the existing Application controller that shipped with the canned layout. Create a new Scala Object under the controllers package and name it Tickets and give it a superclass of play.api.mvc.Controller. We are going to use this controller as the endpoint to determine how many tickets are available, which for now is going to be our constant value of 1000.

The controller objects are where we group common functions that will create our web responses in the form of Actions. Go ahead and add a basic action named ticketsAvailable that simply returns the value. When you’re done, your controller should look similar to this:

Notice the wildcard import for play.api.mvc._. That’s because I’m lazy. You can go through and fix the specific imports after the fact, but for quick and dirty development, it’s easier to just bring in the whole mvc namespace. There is also a Request parameter passed in. Even if you are not using it directly, it does not hurt to have it visibly present.

To expose this action for serving, we need to create a route. The routes for Play applications are stored in the conf/routes file. Depending on the other web frameworks you have used in the past you may notice that Play requires you to explicity state the HTTP method for each route. This is because for a proper REST service, a GET is different than a POST.

Open up the routes file and add the following line to the bottom of the file:

From here we can use curl to verify the application is serving requests via our new route.

We now have a REST endpoint to tell us how many tickets are available for purchase. Unfortunately, this is a pretty lame response. There is no mechanism for the server to communicate errors and the X in AJAX stands for JSON! (Ok, it doesn’t but XML is gross.)

We can easily create a JSON response on the fly with the included Play json library. For our JSON payload we will have two fields:

You can see the result with curl to verify the controller is serving the result as expected.

Our ticketsAvailable function now works as expected, but there is definitely a cleaner way to create response results. We can create case classes for the responses. Note the use of the Option for the nullable field.

To prepare the case class for serialization, we need to create an implicit JSON formatter. A JSON formatter is the code that tells Play how the class is to be converted to JSON. This can be placed anywhere, but it is generally a good practice to place it inside the case class’s companion object.

We can now rewrite the ticketsAvailable function to utilize our new response case class.

With this, we can verify the result is identical to before:

Connecting the front end to the back end

Now that we have the back end working, we need to write a basic front end that will connect to our API and display the results on the page dynamically. Before we hook everything up, we are going to lay out the javascript code that we want to run with TODOs as placeholders for the code we have not yet built.

Replace your index.html.scala view with the following.

Notice that we have removed the arguments to the index template so you will need to modify your index function in Application.scala to not pass in any arguments as well.

Sure, we can just use document.getElementById to access the DOM elements, but chances are we would eventually want some javascript library such as jQuery. We can easily link to the jQuery CDN or download a copy and include it in your source, but there’s a better way.

This better way is WebJars. With WebJars, client side dependencies are managed with sbt, the same way as other java and scala dependencies.

Add the following to your build.sbt file in the libraryDependencies section:

To download a dependency, you will need to exit activator and restart it. Once you have done that, you will notice the dependency being automatically downloaded. One of the primary benefits with this approach is that your repository does not grow or change based on upgrades to a third party library that you aren’t really modifying. The act of updating to a newer version is reflected in the source control as simply a version change in your build file.

Add the following to main.scala.html:

When it comes time to access the API endpoint /tickets/available/ that we created earlier, you could just build up the request with an opaque string that mirrors the route, or you can take advantage of another facet of Play.

Play has a feature called the Javascript Router that makes your server side functions available to your client side code. Instead of copying paths to your client side javascript and maintaining it in several places, you can create an object that contains all of this functionality for you. Open up controllers.Application.scala and add the following function to the controller:

Since the javascript router is another Action, we also need to create a route to make it accessible:

Finally, add a link to the javascript generated for the router in main.scala.html underneath the previous script tag from the jQuery WebJar:

By adding it to main.scala.html this router object is available to any view that inherits from main. Any function added to the javascript router is now accessible in client side javascript with the pattern jsRoutes.controllers.ControllerName.functionName(arguments, to, function). The resulting object contains an .ajax() function built in, making a clean and easy way to interact with your web services.

This can all be combined with the previous index.scala.html to create an ajax powered page.

Refresh the page again in your browser and you’ll see the result that looks identical to the template one, but has now been rendered using the asynchronous call to the API.

At this point we have built a controller, created JSON serialized case classes, added a third party WebJar and used a javascript router to enable our AJAX calls.

This is a good first step towards our Ticket Overlords store, but it is just scratching the surface. In Part 2, we will upgrade from framework version 2.3 to the soon to be released Play framework 2.4. In Part 3, we will cover database access, schema creation and migration and build out more of the REST API.